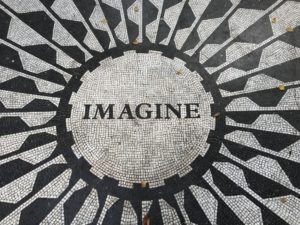 Last week, I wrote a little about saying no and setting intentional boundaries to guard against mindless automatic decisions that rob us from fully living our lives on our own terms.

Those boundaries create a little extra space to open up to possibility.

​It begins with awareness. Tuning in rather than weeding yourself out.

Why couldn’t you move to be near the ocean? Why wouldn’t you succeed in writing that book? Why not introduce yourself to your hero or apply for the outrageous opportunity that landed in your inbox?

Here’s what I’ve found on my own journey of seeing the world a bit more through the lens of confident possibility:

All of the most meaningful experiences in my life began as audacious, seemingly unrealistic actions.

I met one of my closest friends by saying hello at one of their book signings.

I never would have imagined that attending that event would have led to one of the most transformative relationships of my life, going on four years.

I accidentally became a business consultant and coach by asking to volunteer on a local author’s book launch campaign.

Making copies and chasing down coffees led to being hired by her literary agent, and then referred to a visionary integrative oncologist who I’ve now worked with for nearly six years (among many other clients).

That one client relationship with the doctor quite possibly saved my life.

When I became type 1 diabetic, I was struggling and had already passed out at home alone. My client insisted I fly down to Phoenix to see an expert, who turned a devastating diagnosis into a blessing.

When an opportunity that aligns with your purpose or passion shows up, say yes. Throw your hat in the ring.

You never know where it will lead, until years down the road you stand back and recognize all of the connections that added up to something pretty remarkable.

The worst case scenario is usually still a net positive.

The job I didn’t get…forced me to question the status quo and reconnect with my purpose, while introducing me to unexpected opportunities.

The house I didn’t get…made it so I could put the first offer in on the home of my dreams that was listed the next day.

The marriage that didn’t work…taught me more about myself than I could have learned in a lifetime on my own.

The TEDx applications that weren’t accepted…meant giving my talk when I was actually ready.

Why not? Trust those butterflies of excitement in your gut.

Possibility begins when we stick our hands in the air.