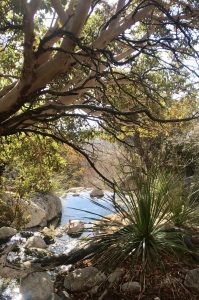 This is the story of a surprising relationship with a tree. We are surrounded by abundance and connection, if we just step out into nature and open our hearts.

On April 1st, I found myself on a seemingly random hike to Smith Springs in Guadalupe Mountains National Park, filling some time before heading up to the tallest summit in Texas for the night.

I was on an 11-day road trip through nine national parks across 5 desert states, and this would be my third night of backpacking ever, having just spent two nights in the Chisos Mountains in Big Bend.

Residing at the southern tip of the Rocky Mountains and the northern edge of the Chihuahuan Desert, there’s not much water in the Guadalupe Mountains. My expectations were for an easy stroll through the desert valley to a little pool of mud.

As I reached a bend in a small canyon, I found a tiny, but clear, trickle of water meandering past a couple cottonwood trees. I took a seat and came to my breath for several minutes, focusing on gratitude for this little oasis of life in the desert.

I heard another hiker approaching, and headed onward to allow him the privacy I was afforded to appreciate the destination of this trail.

Not ten steps further, my view overcame a low hill and I took in a sharp breath, and then laughed out loud.

In front of me: a flowing stream dropping into pool after pool, framed in more shades of green than I can name, butterflies floating from wildflowers to cattail reeds.

I shook my head and made my way down to the largest pool.

I have caught myself many times thinking too small; offensively small when I look up and realize how immense the abundance is.

I took a fresh seat underneath a big, beautiful tree overhanging the pool of water, the bright sunlight shimmering off the surface ripples. The tree’s bark was like a rainbow of browns, oranges and pinks. It reminded me of a tree I encountered in Puerto Rico that boasted the same smooth, colorful bark that peels away in sheets.

I meditated again, a smile on my lips. Somewhere in the midst, I heard a full, warm voice that was not my own.

“You have work to do, dragonfly.”

I had read accounts from others who have claimed communion with the wild, even people who have received a name. These connections are often called “soul encounters.”

Regardless of what I wanted to believe about that moment, whether divine, an actual chat with a tree, or a hallucination brought on by the heat, I got a powerful call to action.

Back at the visitor’s center, I asked a ranger about the tree and then scoured the internet: Madrone.

A Texas Madrone to be exact. A hardwood tree with strong roots that turns toward the sun and is one of very few deciduous trees not to lose its foliage in winter. The Madrone is resistant to fire and resprouts quickly, acting as a nurse tree during forest regeneration, which is perhaps why indigenous cultures associate the tree with resilience and community healing.

In one native legend, as recounted by poet Richard Olafson in the book, An Abecedarian of Sacred Trees, “the tree’s webbed roots hold the splintered earth together.”

It is no accident that this tree is my tree.

Many ideas emerged immediately following my encounter, a task list from beyond, and next steps have continued to follow. I have acted on each with equal measures bewilderment and faith. Much of the time, they don’t make sense, but in retrospect there is always an intelligence in each intertwined piece of the puzzle.

Since that day in Texas, I have encountered Madrone trees in surprising moments of growth.

I camped near Pacific Madrones on my trek into Enchanted Valley in Washington to sleep amongst black bears.

I discovered Madrones in canyons all over southeastern Utah, including Bryce Canyon, although they appeared closer to bushes, likely due to lack of water.

I even found Madrones on my way to the summit of Mount Whitney in the Eastern Sierras of California.

Each year, when December draws near and it’s time to book an international flight to somewhere new for my annual solo retreat, I let intuition make the decision.

I look and look at options and, at some point, I just know. The first trip, to Puerto Rico, came fully formed in a matter of ten minutes. This year was the longest wait by far.

A traumatic incident in September had thrown me. I felt disconnected from my intuition. I was working on trusting my gut again, having realized that intuition guides us into the journey we need, not necessarily the journey we want.

Finally, less than three weeks before I was due to depart, the yes came loud and clear. I booked my flight to Nicaragua.

As I arrived to my first stop in this beautiful country, a driver picked me up from the ferry on Isla Ometepe, an island formed by two volcanoes in the middle of the vast Lake Nicaragua. 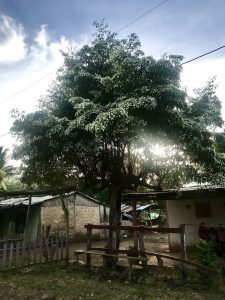 He pulled down the main street of Moyogalpa, and immediately pointed, saying, “Emily! See that tree blooming in white? That is Madroño. It is the national tree of Nicaragua.”

I stared at him in disbelief and then laughed out loud.

He went on to explain that the Madroño blooms from November to February, and that it’s flowers are often used in celebration of La Purísima Concepción de María.

How could this be, except by this little understood phenomenon of synchronicity, where wisdom that flows from somewhere other than the mind guides us into meaningful encounters with our own souls?

Ask. Listen. Trust the yes, and let go of the futile perception of control.

Whatever you believe in, the universe, God, nature, there is liberation and profound meaning in allowing answers to appear.

“Nature, too, supports our personal blossoming (if we have any quiet exposure to her) through her spontaneities, through her beauty, power, and mirroring, through her dazzling variety of species and habitats, and by way of the wind, Moon, Sun, stars, and galaxies.”​ – Bill Plotkin, Nature and the Human Soul: Cultivating Wholeness and Community in a Fragmented World

– Written on Playa Marsella, on the west coast of Nicaragua, surrounded by blooming Madroños